Hello, dear friends in this article I will tell you about “King Oyster Mushroom(Pleurotus Eryngii)latest Production Technology 2020 “

some mushrooms have medicinal properties. mushrooms prevent cancer from growing. Mushroom is rich in many similar qualities.

In the early times, everybody treated mushrooms as a special kind of food, they consider as the oldest microbial food.

Among higher fungi, Pleurotus is well considered as an economically important genus. It accepts every season with ease of being common. King Oyster Mushroom (Pleurotus Eryngii) is full of Health Benefits.

Thus, king oysters (Pleurotus mushrooms) are now cultivated on many agricultural wastes and industry. King Oyster Mushroom is very much liked in countries like China and Japan.

King oyster mushroom is a mainstream mushroom of countries like China, Japan. And this mushroom is being liked in these countries due to its texture and shelf life and pulp.

In Japan in the early 1950s, king oyster mushrooms were cultivated in wooden logs, but by the 1960s, this mushroom was cultivated in plastic bottles with sawdust.

you should not miss the Reishi Mushroom History, Benefits, Side-effects, Production Technology

In Japan, king oyster mushrooms are mainly produced by mixing with wheat or rice bran or cedar tree sawdust or wood sawdust filling them in polypropylene bags.

bags are autoclave, and spawned & spawn run in bags

The mushroom cultivation is continuously growing in China and this mushroom in China Mixing wheat bran in a cotton shell and wood sawdust in polypropylene bottles, and 65% moisture and 6.5 pH value of the above mixture fill in the bottle or PP bag of 1 to 1.5 Kg.

After cooling, they are mix with liquid mycelium culture and kept at a temperature of 23 to 27-degree centigrade.

When the mushroom mold completely spread, maintain the room temperature at 14 to 16 degrees Celsius and open the window for light and airflow. After some day mushrooms are ready to harvest

The cultivation of king oyster mushrooms in our country is not being produced on an industrial scale.

In some small growing and experimental levels, this mushroom is cultivated in wood sawdust by adding 20 percent wheat bran, 0.5 percent calcium sulfate, 2 percent calcium carbonate, 60-62 percent moisture, and filling up to 2 kg in polypropylene bags.

Autoclave the bags at a pressure of 22 psi for 2 hours and after cooling, mix the grains at a rate of 4-5 percent.

fruit bodies are kept in each bag or bottle

Bags are incubated for 24-25 days at a temperature of 24-25 degrees. During this time, mycelium spreads in the entire bag. At this stage, these bags are transferred to the mushroom production room and open the mouth of the bags from above.

The production of king oyster mushroom starts in 10-12 days. The temperature of the room is about 14 to 16 °C and the humidity 80-90 percent.

The average biological production capacity of this mushroom is 50 to 60 percent in a cropping period of 30-40 days.

Eryngii produces fruiting bodies with diameter 3-10 cm; the shaft will be 3-10 cm long. The fruiting bodies of King Oyster will reach up to 300 grams under well environmental conditions.

Removing the mushrooms at the base of the stem, be careful not to damage the top of the block.

Fresh Pleurotus Eryngii Mushroom can be stored in the fridge for about 2 weeks!

Where to sold in India:

Fresh Pleurotus Eryngii Mushroom is sold in India at INA and Khan Market, Delhi at an average rate of Rs 500 to 600 per kg. When you buy a ready-to-go fruit bag, it costs Rs 200 per kg.

Include mushrooms in your daily diet, it will help you to increase your immunity and capability.

Get the training of king oyster mushroom in India from the Horticulture department.

Mushroom production and prospects all over the world & India 2020

What are medicinal mushrooms? and Nutritional Value of Mushrooms

What is contract farming? Advantages and challenges in India 2020 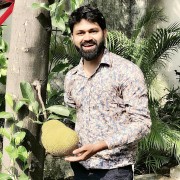 SUNIL YADAV
I was born into a farmer's family in a village near Banaras. I completed my studies in mechanical engineering and I am the first engineer in my village. Since childhood, I have been more attracted to nature and wanted to do something that would keep me connected to farms and farmers. I love to do research and collect the latest information about agriculture, horticulture and then I write articles about them. If my farmer brothers benefit even a little from the articles I write, I will consider myself very lucky.
Next

What is Life-changing contract farming? Advantages and challenges in India 2020